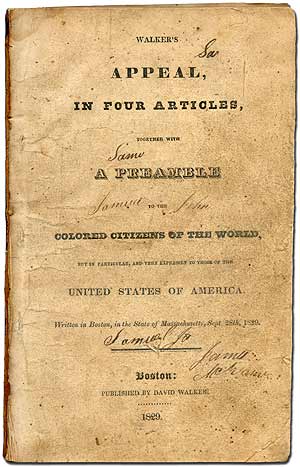 We offered this copy, one of seven known first edition copies of this famous African-American rarity, in 2010.

One of the first published African-American authors, and the first to take a stand against slavery in his writings, the publication of which he financed himself. Though born free in North Carolina, Walker's father was a slave and he observed slavery firsthand for years before finally moving North, establishing himself in Boston in the late 1820s as a clothing merchant. In 1829 he published is famous Appeal, a collection of strident essays calling for an end to slavery, by force if necessary. He shrewdly aimed to put his appeal before his enslaved countrymenand used networks of African-Americans, including black seamen, to get copies into the hands of Southern slaves, where it could be read aloud in secret to small groups. He also rapidly reprinted the pamphlet in second and third editions which he expanded to make his arguments even more forceful (this first edition is important not only for its primacy, but also as it differs textually from the more readily available and studied reprints). Southern governments, both state and local, were horrified by the Appeal and reacted by arresting and even lynching slaves and free blacks suspected of owning the pamphlet. All found copies were destroyed. The governor of Virginia demanded that the mayor of Boston arrest Walker and send him south for trial. Savannah, Georgia banned black sailors from coming ashore. Several states quickly enacted strict laws to prohibit literacy and education of African-Americans, and slave-owners put up a bounty of $1000 for Walker's assassination and $10,000 for his capture and return to the South. Walker was found dead in his Boston home on June 28, 1830, three months after the publication of the third edition of his pamphlet. The official cause of death was consumption, which claimed many Bostonians at the time including his infant daughter, but the suspicion that Walker was poisoned has surrounded his death from 1830 to the present. His son, Edward G. Walker, born shortly after his death, became the first African-American elected to the Massachusetts state legislature.