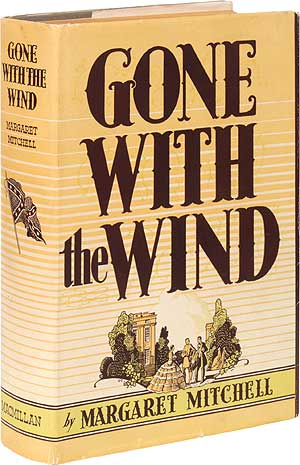 We offered this copy of the first edition in an unrestored, first issue dustwrapper in our Catalog 105. 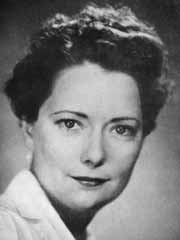 American author of the enormously popular novel Gone with the Wind (1936). - Merriam-Webster's Encyclopedia of Literature

Margaret Mitchell was the All-20th-Century-One-Book-Wonder, until Harper Lee wrested the title away from her in 1960. Mitchell lived another 13 years, Lee is at 45 and counting. To say that Mitchell's Gone with the Wind (1936, and yes it has to say "published May, 1936", and mention no subsequent dates on the copyright page), which won that year's Pulitzer Prize, spawned a cult would be a bombastic understatement (is that even possible?). Curiously, some of those that revere the book (and movie) most, because of its reinforcement of the idea of the gay old times in the ante-bellum South, never seem to understand how thoroughly she undercut the more mythic elements of that experience in her novel. No matter, but if you ever want to have your preconceived notions taken out for a brisk workout, read this book, and then read W.J. Cash's The Mind of the South (1941). Very interesting. Rumors that Mitchell spent the remainder of her life signing copies of the book, until she was run over by a car in 1949, are probably not true, although she certainly spent some significant time doing that very thing. If she was run over by a bookseller attempting to preserve the value of her signature (and we're not saying she was, although does Cliff Graubart of the Old New York Book Shop in Atlanta have an alibi for that day?), the bookseller might as well not have bothered. While in universal terms, signed copies of the book are not "rare," there appears to be more than enough of a market to absorb all or most of those copies pretty quickly. Beware of first editions with jackets married from later printings -- "GWTW" as some call it, has to be the third title listed in the right-hand column of books advertised on the rear panel of the jacket.