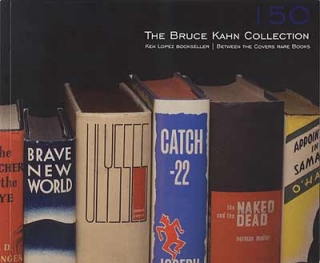 We are pleased to offer, jointly with Ken Lopez, Bookseller, one of the finest collections of Modern Literature ever assembled: The Bruce Kahn Collection. For the first catalog from this collection we gathered some of its highlights, and both Ken and Tom wrote the introductions that follow. On Ken's website you can view currently available items from the original catalog, the full text of the catalog, or a 10MB PDF file of the fully illustrated catalog in all its glory. The catalog has received praise from several sources including Nicholas Basbanes.

But the original catalog was just the tip of the iceberg. The collection has several thousand pristine and signed copies of notable works of modern literature. You can view all the books we are currently offering from the Bruce Kahn Collection on our website here (remember, you can use the Sort By and Show Only tools to help navigate this large collection).

Ken's Introduction:
A Note About This Catalog

This catalog is made up of books from the collection of Bruce Kahn. We have selected a number of the "high spots" in his collection to list together because of the remarkable condition of so many of the books, including ones that almost never appear in such condition: it is only occasionally that a single copy of one of these titles comes on the market in the kind of stunning condition that typifies this collection. It is truly notable when such a large group, especially of such significant modern titles, comes on the market at once.

Bruce Kahn is a lawyer in Michigan specializing in mergers and acquisitions. He has been a collector since he was a teenager in the 1950s & 60s, starting with comic books and then building a comprehensive collection of science fiction first editions. He learned early on the mantra that the three most important factors in the collectibility of a modern book are, as they say, "condition, condition, and condition." He also learned early on the value of distinguishing his copies, even from others in superior condition, by getting them signed or inscribed by their authors. Many, if not most, of his science fiction first editions were signed by their authors when he sold his collection in the mid-1980s.

At that time he started collecting "mainstream" modern literature, along with modern mystery and detective fiction. It was a good time to begin such a collection: fine copies of some of the keynote titles of the postwar era were scarce but were nonetheless much more readily available than they are now, nearly a quarter century later. Beautiful copies of such books as To Kill a Mockingbird, On The Road, and The Catcher in the Rye could be had if one were patient and persistent, and Bruce Kahn was both.

He collected in the style of the old-time book collectors - that is, he collected authors in depth, pursuing all their published titles, variant editions such as proofs, advance copies, and broadsides, and in many cases U.K. editions as well as U.S. ones. As a result, the author collections themselves end up being bibliographically significant, especially for those authors for whom there is not yet an "official" or definitive bibliography. Bruce has had a particular interest in the writings of Jim Harrison, and his collection contributed significantly to the forthcoming Harrison bibliography. In this catalog, we have merely sampled the author collections, rather than listing any given author exhaustively; but one gets a sense of the depth and range of the collection.

We are issuing this catalog at a moment when our economy has experienced the most dramatic turmoil in decades. However, it may prove opportune to remember, as one of my colleagues recently wrote me, that the books and literature that "we deal in will endure, and contains the seeds of knowledge and spiritual nourishment." It is the understanding of this value - of what underlies monetary value - that can and should reassure us: these books are an important part of our cultural makeup and our intellectual and moral heritage. That is and will remain true. After economic hard times have passed, these will still be the books that have shaped our society's evolution; in that respect their value will remain unchanged, and they will still be among the important works of literature of the 20th century. If books are still collected - and there is little doubt they will be - the books of the Bruce Kahn collection will still be among the most desirable copies of the most important titles of our time. We are honored to present such a comprehensive collection of such excellent quality.

This catalog has been jointly prepared and is being jointly offered by Between the Covers Rare Books and Ken Lopez Bookseller, both of us longtime dealers in 20th century literature. For ease of logistics, the books are in one place, in Hadley, Massachusetts, and the catalogs have been mailed from there. Please call or email Ken Lopez Bookseller with your orders or inquiries. Thank you.

I have been dealing with Bruce Kahn for at least two decades. He has always been a pleasant and genial fellow. He is an articulate and engaging conversationalist on many subjects, and most particularly literary subjects, and despite being a successful and very busy attorney, is always willing to make time to talk about them. For an attorney he is unusually hip: he is an accomplished musician with a wide range of interests in cultural and counterculture issues, and has a ready store of interesting and amusing anecdotes. He is a generous host. For all I know, like a Boy Scout, he is also probably cheerful, thrifty, brave, clean, and reverent. So what's the problem with Bruce Kahn?

That's easy: Jeez, he was a pain in the ass to sell books to. He always wanted his books to be in perfect condition, and even the slightest flaw would be either unacceptable, or if he finally decided he could overlook some nearly microscopic flaw, it had damn well better be mitigated by being a unique copy or an exceptionally rare book, or an important association copy, or preferably both. What's a bookseller to do? This set a pretty high standard for selling him books, and to some degree it is amazing that he has managed to assemble a collection of about 15,000 books in beautiful condition, many of which you will be seeing in subsequent catalogs from Ken and me.

However, the flip side of the ordeal of selling books to Bruce, was that now when it has come time to sell the books, there isn't very much for prospective buyers to complain about. Indeed the reason Ken is the "general editor" of this catalog is that I got sick of writing "Very fine in very fine dustwrapper. Signed by the author." Where's the fun in that, anyway?

In any event, in the sometimes perilous and occasionally anxious activity of buying modern first editions, the question of whether these books are going to be nice enough for you probably isn't going to come up. So I'd advise that if these titles appeal to you, get them while you can. You probably won't be seeing better copies.