Hardcover. First edition. Illustrated. Slightly cocked and with a little foxing on the spine, else near fine in very good dustwrapper with a few small creased tears. Inscribed by Bemelmans with a sketch of an arm and hand hoisting a cocktail: "Carmel, with love Ludwig B." 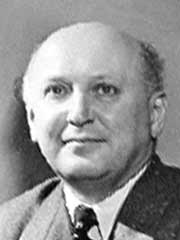 Renowned as an author and illustrator of children's books, in particular the five books featuring the French orphan and schoolgirl Madeline, Ludwig Bemelmans was a man of many talents who also published novels, short stories, essays, biography, humor, memoirs, and travel guides. A 1930s visit by May Massee, Viking children's book editor, to Bemelmans's New York apartment launched his career as an author-illustrator. What she saw there were landscapes of his native Austria painted on the window shades to ease his homesickness, and extravagant furniture that he could not afford to buy painted on the walls. This convinced her that he should write for children. Bemelmans's first children's book, Hansi, was the immediate result. As is typical of Bemelmans's works, Hansi was to a large extent based on his experiences. According to essayist Claudia Lewis of Twentieth-Century Children's Writers, both the illustrations and the text of Hansi reflect the "scenes and people Bemelmans knew as a child growing up in the Austrian Tyrol." Other books for children soon followed, leading to the appearance and unqualified success of Madeline in 1939. Unlike Bemelmans's previous children's books, Madeline and its sequels were written in verse, generally rhymed couplets. The protagonist of the series is an adventuresome young girl who lives at a convent school in Paris. Madeline's adventures invariably involve her schoolgirl companions and their teacher, Miss Clavel. The opening book of the series details Madeline's hospital stay while she has her appendix removed. In the sequel Madeline's Rescue, which received the Caldecott Medal in 1954, Madeline falls into the Seine and is rescued from drowning by a stray dog that is soon adopted by the convent. Three more "Madeline" books followed, and Bemelmans was working on a sixth at the time of his death in 1962. The "Madeline" books have sold over a quarter of a million copies and have been adapted for films. Coincident with the success of his children's books, Bemelmans's other works were also for the most part very well received by critics. Like much of his other work, Bemelmans's travel books were often unconventional. A Kirkus reviewer described Italian Holiday as a "wholly unorthodox approach to touring Italy enlivened by Bemelmans' individuality and the odd angles he chooses for exploration." The critics' love affair with Bemelmans also encompassed his novels and short stories. - from Contemporary Authors Onlinemore