Softcover. Magazines. Digests (12mos). Perfectbound in illustrated wrappers. Overall very good or better with light rubbing and wear, some tape shadows at the spine ends and occasion newsstand price stamp. A nearly complete run, lacking only one issue (March 1973), of the first 25 years of this important fantasy and science-fiction anthology that showcased many of the top writers of the mid-20th Century, such as Issiac Asimov, Robert Heinlein, Ray Bradbury, Fritz Lieber, Richard Matheson, Arthur C. Clarke, L. Sprague de Camp, Brian Aldiss, Daniel Keyes, Theodore Sturgeon, Poul Anderson, James Blish, and Harlan Ellison, with cover art by notable artists such as Chesley Bonestell, Kelly Freas, and James Salter. *The Magazine of Fantasy & Science Fiction* was created as a companion magazine to the *Ellery Queen's Mystery Magazine* under the title *The Magazine of Fantasy*, but science fiction was added with the second issue and it quickly set itself apart from its competitors due to its selection of diverse and literary minded authors. Among the many notable story it first published are: Matheson's first professionally published story, "Born of Man and Woman"; Ward Moore's "Bring the Jubilee," an alternative history story describing the South's victory in the Civil War; Keyes' Hugo Award-winning story, "Flowers for Algernon," which was later adapted into a full-length novel of the same name and the feature film, *Charly*; Heinlein's two-part story, "Starship Soldiers," which was expanded into *Starship Troopers*; and Lieber's Hugo and Nebula Award-winning Fafhrd and the Gray Mouser story, "Ill Met in Lankhmar." A wonderful collection of this important and influential fantasy and science-fiction anthology. 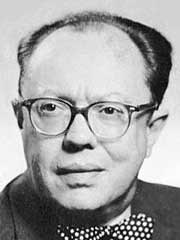 American mystery and science-fiction author and editor. Boucher helped found the Mystery Writers of America, and the annual mystery convention, Bouchercon, is named in his honor.more