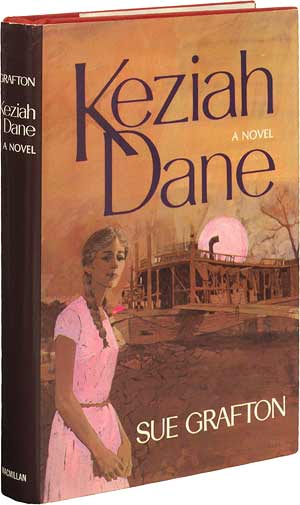 We offered this copy of the first edition in our Catalog 103.

One of several women writers who came to prominence in the mystery field during the 1980s, Sue Grafton is best known for creating the female private detective character Kinsey Millhone. Millhone plies her trade in Southern California, where she walks the mean streets in the manner defined by such writers of the hard-boiled detective genre as Raymond Chandler and Dashiell Hammett. While she successfully updates the familiar formulas of the detective genre for a contemporary audience, Grafton also makes changes to the genre from a feminist perspective by downplaying the macho violence and posturing commonly found in detective novels and emphasizing the suspense instead. Her creation of Millhone--part hard-boiled detective and part feminist icon--has proven popular with a mass audience. Millhone's cases focus on women in trouble, with the detective often called upon to prove a woman's innocence of a crime or locate a missing relative.

Grafton first began writing as a teenager, took a college course in fiction writing, and wrote in the evening and on weekends while raising a family. She published her first novel in 1967. The story of a female matriarch who struggles against great odds to hold her family together, Keziah Dane met with moderate critical praise. Her second novel, The Lolly-Madonna War, concerns a feud between rival mountain families. During the 1970s Grafton turned from novels to television script writing, authoring a number of made-for-television movies, an episode of the "Rhoda" series, and adaptations of other writers' works. In the 1980s she adapted two Agatha Christie novels for television.

Grafton published her first Kinsey Millhone mystery novel--"A" Is for Alibi--in 1982. She was drawn to the genre partly because of her father's enthusiasm for mysteries. He had published two mystery novels under the name C.W. Grafton, writing the books in the evenings after work. In addition to the affection for mysteries inspired by her father, Grafton was intrigued too by her father's book titles, which used lines from an old children's nursery rhyme. The idea of interconnecting the book titles in an ongoing series appealed to her. When she read a book written by cartoonist Edward Gorey--an alphabet book of gruesome deaths--Grafton found her final inspiration. The Kinsey Millhone novels have titles taken from the alphabet: "A" Is for Alibi, "B" Is for Burglar, and so on.

In the first book of the series, "A" Is for Alibi, Millhone is hired to clear a woman who has just spent eight years in prison for poisoning her husband. In "B" Is for Burglar, the feisty detective must track down a missing sister whose signature is required on family papers, uncovering a murder plot along the way. Car accident victim Bobby Callahan, Kinsey's client in C Is for Corpse, hires the private investigator to find out who--if anyone--has tried to kill him by running his car off the road. Kinsey's search for a deadbeat client turns ugly in D Is for Deadbeat. In E Is for Evidence Kinsey becomes one of the prime suspects in an "arson for hire" scheme. The detective finds the process of clearing her name hampered not only by planted evidence and evasive clues, but by the sudden reappearance of her ex-husband as well. In F Is for Fugitive, Kinsey returns to chasing bad guys. In this case, her target is Bailey Fowler, whose checkered past includes a murder conviction and a prison escape. After seventeen years on the run, Fowler has run afoul of the law once again; he has also managed to escape from a medium-security penal institution. Kinsey is again faced with some tough personal dilemmas in G Is for Gumshoe where the investigator celebrates a birthday, moves into a new apartment, takes on what should be a simple missing persons case, and finds herself on a hit list; she also gets very involved with the man she hires to act as her bodyguard. In H Is for Homicide, the death of a coworker puts Kinsey in the middle of a particularly nasty insurance fraud investigation. Kinsey is fired by the insurance agency for whom she investigates, and is forced to take on a last-minute murder investigation in which the ex-husband of a murdered artist claims that David Barney, her current husband, is guilty in I Is for Innocent. In J Is for Judgment the orphaned Kinsey discovers a long-lost family she never knew she had. An unexpected bout with insomnia thrusts Kinsey into the unfamiliar after-dark hours in K Is for Killer. Her nocturnal investigation into the murder of a young woman (who worked as a part-time prostitute) results in a compelling case and leads to some difficult moral dilemmas for Kinsey. In L Is for Lawless Kinsey's curiosity lands her on a cross-country treasure hunt with a 65-year-old escaped convict and his daughter. Kinsey locates the missing heir to a fortune in M Is for Malice, then stays around to protect him from his three brothers, who mean him no good. When he is killed, Kinsey attempts to identify his murderer. In N Is for Noose, Kinsey investigates the death of detective Tom Newquist, and finds her own life on the line. Kinsey comes into possession of the contents of an abandoned storage unit in O Is for Outlaw (2001), and one of the things she finds in it makes her wonder if she was right that her first husband had committed murder. Suddenly she is not so sure. In P Is for Peril (2001), Kinsey investigates the disappearance of a prominent physician.

Grafton's mystery novels contain gripping suspense and suitable plot twists that insure their popularity with a large audience of mystery readers who consistently push series titles onto the bestseller lists. For more serious genre fans, the books are often reminiscent of or play off of the works of earlier mystery writers like Ross Macdonald, whose books feature similar plots in which long-concealed family secrets are uncovered, and Raymond Chandler, whose detective Philip Marlowe is an obvious model for Millhone.

But perhaps the strongest appeal of Grafton's mysteries lies in the character of Millhone herself. Grafton has told interviewers that the fictional Millhone is a version of herself, what she would have been if she had not married young and had children. A twice-divorced, 32-year-old when she is first introduced in the series, Millhone is a believable character, both as a private investigator working in a male-dominated profession and as a strong and independent woman. She cuts her own hair, refuses to wear make-up, and has no interest in fashion. She lives alone and owns a total of one dress. When she is forced to kill someone in the line of duty, she is emotionally bothered by the act. Millhone's unsentimental approach to family and emotional relationships gives her wise-cracking attitude--common to private eyes in dozens of other mystery series--an edge that few other fictional detectives possess. This wise-cracking, combined with her brains and fortitude, make Millhone a character whose exploits would be of interest to readers even if she were not a detective. More than that, they make Millhone one of the few strong and believable woman characters in popular fiction today. - Feminist Writers