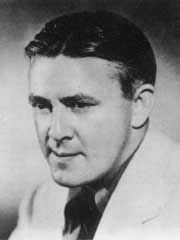 English novelist whose popular works include Lost Horizon (1933), Good-bye, Mr. Chips (1934), and Random Harvest (1941), all of which were made into highly successful motion pictures. - Merriam-Webster's Encyclopedia of Literature

James Hilton is best known for his two novels Lost Horizon (1933), and Goodbye, Mister Chips (1934), presumably their popularity has been enhanced by the beloved movies made from both. Lost Horizon is preferred in the English edition, though fine copies of the American will usually draw a crowd if they are in reasonably nice condition. The true first edition of Goodbye, Mister Chips is actually the scarcer American edition, though the English edition is also desirable. What isn't generally known is that he wrote a Haycraft-Queen Cornerstone, Murder at School (1933) under the pseudonym Glen Trevor, that is very uncommon, especially in jacket, and probably will be as expensive as his better known works. We have also occasionally been tempted to buy the English editions of his earlier titles when we have found them in nice jackets, and have not been disappointed in their ability to find homes in a reasonably prompt manner.

Email us to request a printed copy of our catalog of James Hilton Rare Books and First Editions (or download it via the link as a 4.39 MB pdf file).