New York: Sotheby's, 1997. Hardcover. First edition. Quarto. Approximate measurements are 9 1/4" x 12". 475pp. Fine in fine dustwrapper. Laid in an invitation to the auction along with an errata slip. More Boston: The Museum of Fine Arts, 1970. Softcover. Exhibition catalog. Foreword by William A. Bagnall. Introduction by Edmund B. Gaither. Oblong small quarto. [92]pp. Heavily illustrated in black and white. Wrappers with modest wear, lower wrap creased at the foredge, very good or better. Catalogue for "the largest and most..... More 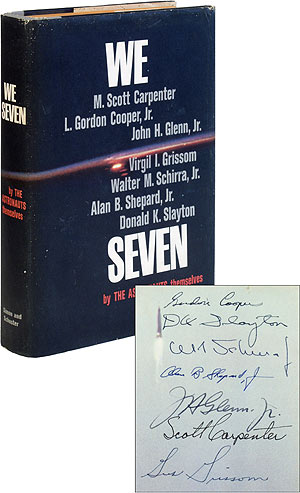 Book club edition
A book issued, usually at a discounted price, by one of the many clubs, the best-known being the Book-of-the-Month Club (sometimes abbreviated as BOMC), which would re-publish popular books. Usually the club would economize in any number of ways including using a smaller format for the book, printing the text on cheaper paper, using cheaper boards (often covered in paper rather than cloth), printing the dustwrapper on thinner or uncoated paper stock, etc. Books club editions usually don't have a printed price on the jacket flap, and sometimes might have a small blindstamped dot, circle, or square at the bottom of the rear board. Some book clubs, in particular, the BOMC during a certain, long period of their existence tried to look exactly like the publishers' editions. In those cases, lack of a price, a blindstamped dot, or occasionally an alphanumeric code running vertically up the inner margin of the last page of the text block can be the only way(s) to identify the book club editions. Most book club editions are not collectible, but that's another topic altogether. This copy of We Seven offered in 2005 was a mere a book club edition, but it was also signed by all seven Mercury astronauts, proving that at least one inspired collector was able to turn lemons into lemonade.more