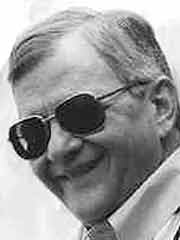 Tom Clancy is credited with inventing the techno-military thriller, a genre involving multiple plotlines, extensive description of military personnel and gear, and a large cast of characters ranging from Soviet military officers and CIA directors to the president of the United States. Extremely popular with the U.S. Armed Forces and government officials, including former Secretary of Defense Caspar Weinberger and President Ronald Reagan, Clancy has been hailed by Ross Thomas in Washington Post Book World as the "novelist laureate of the military-industrial complex."

A former insurance salesman, Clancy has had a long fascination with machines, systems, and procedures, especially those dealing with the U.S. military. Along with that interest lies a passion for research. So it was after reading several declassified documents on submarine construction, warfare, and deployment that Clancy wrote his first novel, The Hunt for Red October (1984). Extrapolating from information available to the public, Clancy created the story of Marko Ramius, a Lithuanian submarine captain who attempts to defect to the United States from the Soviet Union in a new attack submarine. Armed with nuclear warheads and carrying a prototype silent propulsion system, Ramius slips away from Soviet waters and races to America pursued by a Soviet fleet that has orders to sink him.

Strong adherence to procedural detail gives Clancy's books a sense of realism surpassing most modern suspense fiction. While the soldiers of his books are idealized, Clancy does not turn the CIA into a group of James Bond clones; mistakes are made, plans fail, and characters die. Yet Jack Ryan has emerged as Clancy's hero - a family man, ex-Marine, and CIA analyst who rises through the ranks to become the Deputy Director of Intelligence, and many scenes in which Ryan appears are unrealistic. Readers generally forgive Clancy his excesses, though, because they are swept toward the startling climax that is a hallmark of his best works.

While several military officials have grown uncomfortable with Clancy's suppositions of top-secret material, charging that the author's fiction is quite close to fact, Clancy has repeatedly insisted that he has never seen any classified material and would report to the Federal Bureau of Investigation anyone who would attempt to show him such documents. In fact, he readily admits that his prose is not his strong point, and stresses that the details and the plots of his novels offset that shortcoming. "I'm not that good a writer. I do a good action scene. I handle technology well," Clancy said in an interview with the Washington Post. "Beyond that I'll try to . . . improve what needs improving." - friom Contemporary Popular Writersmore