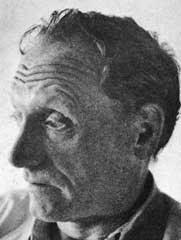 American novelist, poet, critic, and teacher, best known for his treatment of moral dilemmas in a South beset by the erosion of its traditional rural values. He won the Pulitzer Prize for fiction in 1947 and for poetry in 1958 and 1979, and he became the first poet laureate of the United States in 1986. - Merriam-Webster's Encyclopedia of Literature

He was the first author to win the Pulitzer Prize for both Fiction and Poetry.more

Warren's first book, John Brown: The Making of a Martyr (1929) was reportedly issued in an edition of only 500 copies, and although it is a scarce book in nice condition, it seems more common than that. His most sought after title is All The King's Men (1946 - the book has to state first edition, and the rear panel of the jacket has to start out with "What Sinclair Lewis Says..."). He has several uncommon and expensive limited editions, including his second book, Thirty-Six Poems (1936 - with two states: one of 20 copies indicated with Roman numerals, and 135 copies numbered 1-135), Blackberry Winter (1946 - with issues of 50 and 280 copies respectively), and To A Little Girl, One Year Old, in a Ruined Fortress (1956 - approximately 175 copies). Warren was generous with his signature, and while signed copies are always nice, one shouldn't pay too much of a premium for signed copies unless you really, really want to.

Email us to request a printed copy of our catalog of Robert Penn Warren Rare Books and First Editions (or download it via the link as a 3.06 MB pdf file).