Hardcover. 15 bound volumes. Various colors of cloth with gilt lettering as issued. The first eight volumes are folios; the last seven are large quartos. One modest burn mark on the spine of one volume, else very near fine, and aside from a touch of toning on the newsprint pages, the issues are internally fine and fresh. The volumes contain 180 issues of *Rolling Stone* magazine in all of their tabloid glory, with all wrappers present and accounted for.

Founded in late 1967 (the first issue came out in November of that year), this seven-year run of the tabloid magazine encompasses a large amount of significant journalism from the heyday of the counterculture. The run, though lacking the first 30 issues, is otherwise representative of much of the early San Francisco days of the magazine, before the headquarters were moved to New York in 1977.

There is much too much material for us to describe all of the significant articles or iconic covers, but we'll take a stab at it. Contents include many Hunter S. Thompson articles, including the serialized *Fear and Loathing in Las Vegas* and *Fear and Loathing on the Campaign Trail '72*, and significant early work by several other young authors including Cameron Crowe, Lester Bangs, Joe Klein, Joe Eszterhas, Ben Fong-Torres, Patti Smith, and P.J. O'Rourke. Additionally there are articles and stories by Nora Ephron, Ken Kesey, Tom Wolfe, Andy Warhol, and many others.

Again, there are too many interviews to list, but a few those are with Jim Morrison, Eric Clapton, David Bowie (by William S. Burroughs), Eldridge Cleaver, Daniel Ellsberg, Norman Mailer, Glenn Gould, Paul McCartney, John Lennon, and many more.

Aside from multiple covers of The Beatles, The Rolling Stones, The Grateful Dead, Bob Dylan, and David Bowie, there are covers of Woodstock, Watergate, Altamont, Doonesbury, Nixon, The Allman Brothers, Hugh Hefner, Janis Joplin, Rod Stewart, Michael Jackson, Santana, Sun Ra, Led Zeppelin, The Beach Boys, Charles Manson, Little Richard, Sly and the Family Stone, and over a hundred more, including the issue where Dr. Hook and Medicine Show made the "The Cover of the Rolling Stone."

Of some note are the issues announcing or memorializing the deaths of Jimi Hendrix and Janis Joplin (in two consecutive issues), Jim Morrison, Gram Parsons, Mama Cass, Brian Jones, Tim Buckley, and others.

Additionally there is a vast amount of music criticism and journalism, and emphasis on contemporary culture. A splendid resource. We've seen individual bound volumes, but rarely see runs. 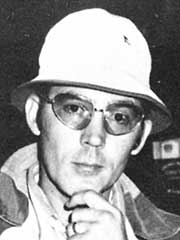 American journalist and author. He was known for his flamboyant writing style, most notably in his novel Fear and Loathing in Las Vegas, which blurred the distinctions between writer and subject, fiction and nonfiction. He was the creator of gonzo journalism and, as such, is widely imitated.more