Hardcover. First edition. Fine in a very good lightly tanned dustwrapper with short closed tears on spine ends and corners. Nice copy of the author's first book, about a boxer who returns from service in the Korean War. Shaara's *Killer Angels* won the Pulitzer Prize. 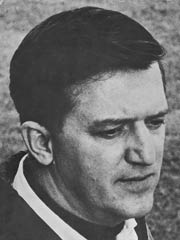 In 1974 Michael Shaara caught lightning in a bottle and wrote The Killer Angels, a transcendent novel about the Civil War and the Battle of Gettysburg, which was the surprise winner of the Pulitzer Prize. Because it is a book nearly impossible not to read more than once, combined with the cheap "perfect" binding provided for the book by the publisher (and which is about the most imperfect way that one can bind a book), copies are generally founded in worn condition. Coveted as both fiction, and by Civil War buffs, nice copies are hard to find and easy to sell. The uses the book has been put to are less admirable, Ted Turner used it as the basis for the film Gettysburg, which brought together the worst collection of fake beards ever compiled in a film, and Shaara's son has undertaken to continue his father's work with an earnest, if commercially successful mediocrity. Stick with dad's book. Shaara published two other books in his lifetime to less than no acclaim, although his first The Broken Place (1968), a Korean War novel, was reportedly a noble effort. His posthumously published novel For Love of the Game (1991), enjoys some currency with fans of baseball fiction. Neither of the last two aforementioned are particularly expensive. During his short life Shaara was reportedly difficult to get along with, and signed copies of his works are very uncommon.more