Softcover. Uncorrected proof. Wrappers. Slight curling and edgewear else about near fine. Signed by the author. 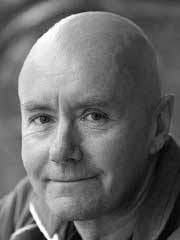 Welsh portrays contemporary Scottish life with brutal accuracy in novels, short stories, and novellas depicting the underbelly of Edinburgh society. Often focusing on aimless and shiftless young people from the lower classes who devote their energies to drugs, crime, and sex, Welsh's stories gain authenticity by his reliance on the Scottish vernacular, which supplies his bleak tales of depravity and degradation with a heavy dose of black humor. Welsh first came to the attention of international audiences with the 1996 film adaptation of his novel Trainspotting (1993), which chronicles the lives of a group of heroin-addicted friends seeking an escape from their oppressive existence in the Edinburgh housing projects, known as the "schemes." Welsh's ongoing commercial success and the cult status of Trainspotting has polarized critics, some of whom praise his stories as innovative social documentaries while others deride them as deftly marketed profanity for the masses. Welsh's high-profile status has enabled him to branch out into directing music videos and writing scripts for plays and movies. He is also a partner in two film production companies.

Welsh's troubled past has provided the inspiration for much of his work. He was born in Leith, a poor Edinburgh neighborhood that became the center of the 1980s Scottish heroin scene. He grew up in the schemes of Muirhouse with his mother, a waitress, and his father, a dock worker. After dropping out of high school at the age of sixteen, Welsh drifted between Scotland and London working odd jobs, including a stint as a singer and guitar player in a punk rock band. During this period, he experimented with various drugs, developing a heroin addiction that he financed through shoplifting and assorted break-ins. A series of arrests eventually broke him of his heroin habit after three years. He capitalized on the property boom of the 1980s, at first working on gentrification projects in London and then securing a job with the Edinburgh housing department. He also obtained an M.B.A. from Heriot-Watt University in Edinburgh. Welsh's discovery in the early 1990s of the "rave" party scene, characterized by all-night dancing to electronic music and liberal drug use, is said to have fueled his ambition to document the youth culture of Scotland. Portions of Trainspotting appeared in the first issue of Rebel, Inc., a countercultural magazine founded in 1992 that attracted such writers as Welsh, Alan Warner, and Duncan McLean because it provided a venue for local subjects. The phenomenon of Trainspotting created an eager market for Welsh's subsequent books, all of which have achieved high sales. At present, Welsh resides primarily in Dublin, but he spends winters in Miami Beach and returns regularly to Edinburgh to indulge his passion for the Hibernian Football Club. Future projects include a novella prequel to Trainspotting and a movie based on the novella The Undefeated from The Acid House (1994).

Trainspotting is often described as a picaresque novel because it is comprised of a loosely connected set of episodes, in this case documenting the misadventures of several friends who become immersed in the street culture of one of Edinburgh's poorest neighborhoods, Leith. The main character is Mark Renton, who is tired of chasing heroin, tired of trying to wean himself from the drug, and tired of living in a stultifying atmosphere, made more miserable by its disproportionately high number of AIDS victims. The title of the novel is a sarcastic reference to the derelict Leith Central railway station, where no trains travel due to Margaret Thatcher's economic cutbacks. Renton and his friends--"Sick Boy," "Spud," and Tommy--rail against the injustices of the British establishment and the ineffectuality of the Scots, thieve and dodge the police, and attempt to appease the violent sociopath "Beggar Boy" because he is a "mate," all the while drifting in and out of an abandoned tenement where they gather to escape from life's dreariness by shooting heroin. The main themes of the novel--the deplorable social conditions of lower-class Edinburgh, British politics and domination, and the lack of a true Scots identity--are driven by the characters' language, a very graphic Edinburgh dialect with which many young readers identified and which many critics praised as a comic tour-de-force. Since non-Scottish readers had difficulty deciphering the phonetically-transcribed text and its local allusions, some later editions of the novel were appended by glossaries.

The settings and themes of Trainspotting are featured in many of Welsh's later works, which also study a variety of addictive and deviant behaviors within the context of a Scotland grown weary of British politics. To the delight of fans of Trainspotting, Welsh has continued to bring the same unflinching sarcasm and street-tough language to the diatribes and mock-serious discussions of his troubled characters. "Sick Boy," Renton, "Spud," and "Beggar Boy" reappear in the novel Porno (2002), which takes place ten years and a series of failed schemes after the events of Trainspotting. In this novel, Sick Boy enlists the aid of his friends in his latest enterprise, directing and producing a pornographic movie. Beggar Boy and Renton make brief appearances in Glue (2001), which also follows friends from the Edinburgh projects, this time charting their paths from the 1970s into the twenty-first century, as they experiment with punk rock and techno music, amphetamines and the drug ecstasy, struggling to escape from the old neighborhood only to wake up one day to realize they are now all failed men in their thirties. While Marabou Stork Nightmares (1995) depicts the squalor and crime of Edinburgh's poor neighborhoods, its main focus revolves around the imaginary worlds of its main character, the comatose Roy Strang, who has failed in his attempt to suffocate himself with a plastic bag. Strang's nightmares and reminiscences merge with the voices of the nurses and doctors in his hospital room, for although he appears to be unconscious, he is aware of everything happening around him. Strang creates a mental dreamscape, where he hunts the Marabou Stork, a scavenging, predatory bird that ravages the jungles of Africa. The stories in the collection The Acid House contain a similar mixture of dream and reality and take place in the same Leith housing projects portrayed in Trainspotting. In some of them, the drug-induced hallucinations of the earlier novel morph into full-blown fantasy, such as in the story "The Granton Star," where a man is transformed into a fly as punishment for squandering his life. Welsh adapted three of the stories of Acid House, including "The Granton Star," for a 1998 Australian film of the same title.

Ecstasy (1996) benefits from Welsh's indoctrination into the rave culture of Edinburgh's dance-club scene. Its three novellas describe the heightened awareness of music and sex made possible by the drug ecstasy but emphasize the darker side of drug use. Ecstasy was the first paperback original to go into the London Daily Times best-sellers list at the number one spot, followed in similar fashion by Filth (1998), a novel about a misogynistic, racist, alcoholic Edinburgh police detective, Sergeant Bruce Robertson. Crime (2008) is the story of Ray Lennox, Robertson's sidekick in Filth, who appears in this novel to stumble upon an interstate pedophile ring while he is vacationing in Miami Beach. The novel The Bedroom Secrets of the Master Chefs (2006) delves into a number of types of addictions--food, sex, alcohol, and celebrity--while exploring one of Welsh's other favorite themes, male rivalry.

Biographies of Welsh frequently allude to the 1993 Booker Prize controversy, when two female judges were so offended by the content of Trainspotting that they succeeded in having the novel dropped from the panel's shortlist. A similar mixture of praise and outrage has defined Welsh's critical reception ever since. Detractors dismiss Welsh as pathological in his fascination with sex, drugs, scatology, and deviant behavior. Also at the negative end of the spectrum, reviewers have questioned his sincerity. For example, Stephen Poole writes, "Glue is nothing less than a bid for panoramic sociological understanding. So [Welsh] forces his characters to philosophise, vapidly ... . At the last minute, he also shoehorns in some child sexual abuse, as if he had almost forgotten this most essential ingredient of his pungent broth. ..." Reviewers also complain that Welsh's familiar formula--the tribulations of profanity-spewing, maladjusted, and disenfranchised Edinburghians--has begun to wear thin. Welsh himself has admitted in interviews that his most recent collection of short stories, If You Liked School You'll Love Work (2007), suffered from his having already exhausted the literary possibilities of his Edinburgh past. Those critics who judge Welsh's stories worthy of serious attention have explored their political and social message, with many viewing his works as an accurate reflection of the ambiguous mix of anger, national pride, apathy, and self-loathing that characterized the Scottish working-class attitude of the 1980s and 1990s. As Stefan Herbrechter notes, "Welsh's characters ... play out the drama of self-destructive identities in an alienating environment. ... Rather than comply and accommodate, Welsh's anti-bourgeois rebels spitefully announce: 'I think I'll stick to drugs to get me through the long, dark night of late capitalism.'" Alan Riach agrees, stating, "At the heart of Trainspotting is the explanation of a defensive national strategy. Doomed and self-aware the main characters might be, but their insight and knowledge empower them to choose their own methods of self-destruction. ..." Willy Maley considers Welsh's recreation of Edinburgh dialect to be an affirmation of Scottish national identity. He writes that Welsh's "commitment to a vibrant oral culture rather than to any specific political project or party means that it is hard to see [his writing] as subversive in any conventional sense. ... Critics who see Welsh's writing as ... just another commodity in a postmodern culture that shelves resistance, fail to take seriously his revolution in language, and his sense of outrage at injustice." Most critics are quick to point out that Welsh's brand of Scottish nationalism is far removed from the nostalgic, romanticized version, popularized in two films that appeared contemporaneously with Trainspotting--Braveheart and Rob Roy. Critic Riach credits Welsh with inaugurating a trend toward realism in the literature emanating from Edinburgh, considering the gritty verisimilitude of his language a highly effective means of expressing the true condition of Scotland's working class. Riach summarizes Welsh's importance: "Welsh's attacks on banal nationalism are activated by moral outrage and the kind of social indignation that comes from first-hand experience of degradation and indignity. His place in the tradition of Scottish fiction may seem exceptional due to his excessive employment of shock tactics but it is deeply implicated in distinctive national literary strategies for self-determination and social betterment." - from Contemporary Literary Criticismmore