Hardcover. First edition. Fine in a slightly age-toned, else fine dustwrapper. Inscribed by Williams to actress Ruth Ford: "To Ruth with my heart on my sleeve. Love, Tennessee." In Williams' *Memoirs* he refers to Ford as "the wise and lovely actress, Ruth Ford, who seems to have been born with more worldly wisdom than I have accumulated even at this point in life." Ford, the Mississippi-born sister of surrealist author Charles Henri Ford, was a beautiful model and actress, first in Orson Welles's Mercury Theatre, and later in films and theater. Notably, she starred on Broadway in Jean Paul Sartre's *No Exit* in 1946, under the direction of John Huston (the last of five Broadway plays he directed). Her apartment in the Dakota became a salon for authors such as Williams, Edward Albee, Terrence McNally, and Truman Capote. A chance encounter between Stephen Sondheim and Arthur Laurents in her Manhattan living room led to their collaboration, with her Dakota-neighbor Leonard Bernstein, on *West Side Story*. Similarly, she brought together Kay Thompson and Hilary Knight to create the celebrated stories of *Eloise*, the little girl who lived at the Plaza.

Ford is well known also for her long friendship with William Faulkner, which began with her dating his brother Dean in the early 1930s. Faulkner was openly smitten with Ford for many years. He wrote his experimental 1951 title *Requiem for a Nun*, a sequel to his early and controversial novel *Sanctuary*, with her in mind. He further declared, to the consternation of his agent and publisher, that it was her dramatic property (*Requiem for a Nun* was a mixture of stage play and novel). Stage production of the title stalled for years, partly because Faulkner's experimental drama did not lend itself to live theatre, and partly because the producers were unsure of Ford's suitability. Faulkner was adamant that it was her dramatic property, and in 1959 she adapted the play herself and starred in its London production opposite her second husband, Zachary Scott. Her stage version received enthusiastic reviews in both London and New York, but did not fare so well with audiences and closed after a short run on Broadway. Ford continued to act on both stage and screen well into the 1980s. She passed away in 2009 at the age of 98. A wonderful inscription and nice association. 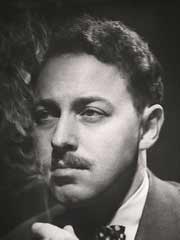 American dramatist whose plays reveal a world of human frustration in which sex and violence often underlie a pervasive atmosphere of romantic gentility. - Merriam-Webster's Encyclopedia of Literaturemore

Email us to request a printed copy of our catalog of Tennessee Williams Rare Books and First Editions (or download it via the link as a 4.87 MB pdf file).