You can view illustrated examples of some of Lee's first editions in our Reference Library. While there, be sure to look in the Reference Info - Images section for additional illustrations of limited editions and authentic inscriptions for many of her books. 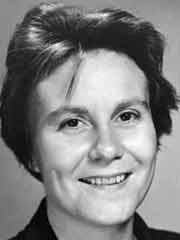 Alabama-born author whose only novel, the Pulitzer Prize-winning To Kill a Mockingbird, a canonical masterpiece of American literature. She also contributed research to another Pulitzer Prize-winning novel, In Cold Blood, written by her childhood friend Truman Capote. Aside from a few essays Lee has published no additional works, making her one of the best one-book authors in literary history.more

A truly fine copy of To Kill A Mockingbird (1960) is a rare bird indeed. The black portions of the jacket rub easily to white (and are prime areas for "touchup" by booksellers who should have their magic markers confiscated by the book police), the brown portions fade, and the book itself tends to "cock " or slant from the spine. Because of the desirability of this title, copies in restored jackets are seen more often than "unsophisticated" copies (according to our colleague Peter L. Stern, "sophisticated" book collectors only want "unsophisticated" books), and when reasonably and professionally accomplished, can be desirable in their own right as an alternative to the high cost of an unrestored copy -- but don't allow yourself to pay a premium for a fine copy if it just happens to LOOK fine -- chances are it's been restored. Any professional should be able to tell -- though it has a deceptively simple design, it's actually one of the most difficult jackets to restore well. Don't despair though, just because an author only wrote one book, doesn't mean you can't keep yourself busy collecting it. We had one customer who had a large collection based on just this one book and related items: advance copies (there are at least two variants), proof copies, signed copies, foreign editions, even books with titles punning on the original. One cookbook he had was entitled To Grill a Mockingbird. In 1993, an Alabama bookseller and historian, Patrick Cather, received from Lee permission to reprint in pamphlet form Romance and High Adventure, a brief essay the author wrote about her passion for Alabama history that had previously appeared in an anthology. Limited to just a 100 copies, none were offered for sale by agreement with the author, but rather given away by Cather as a free keepsake to interested acquaintances. Of course, being as he is a bookseller, a lot of his interested acquaintances were booksellers as well. So while he reaped nary a penny on the venture (or adventure?), copies of this rare little pamphlet quickly made their way into the trade, and for the most part have been swallowed up by those looking to collect another Harper Lee "book", however slight it might seem.more