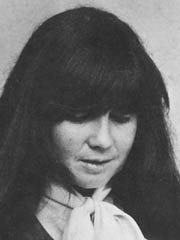 Anne Rice is the best-selling author of mainstream gothic fiction that centers upon the alluring subjects of vampirism, occult demonology, and the supernatural. Her popular novels, rendered in ornate prose marked by painstaking attention to detail, blend accurate historical elements with such themes as alienation and the individual's search for identity. Each of her novels centers on characters from an isolated segment of a real or imagined society: vampires populate Interview with the Vampire (1976) and its sequel, The Vampire Lestat (1985), the first two installments of her "Vampire Chronicles" series; mulattoes and quadroons in New Orleans during the 1840s are the central figures of The Feast of All Saints (1980); and the castrati of eighteenth century Italian opera are featured in Cry to Heaven (1982). Rice's exotic subject matter, brooding sensibility, and baroque prose style prompted Michiko Kakutani to note: "Anne Rice has what might best be described as a Gothic imagination crossed with a campy taste for the decadent and the bizarre."

Born in New Orleans, Louisiana, Rice was originally named Howard Allen O'Brien (her father's first name was Howard and her mother's maiden name was Allen). She disliked this name from an early age and it was legally changed when she was seven years old. Rice's father was a postal worker who also worked on sculpture and writing. Rice lost her mother, an alcoholic, when she was fourteen, and the family moved to Texas. Throughout her childhood Rice attended a Catholic church, but abandoned it when she was eighteen because she felt it was too repressive. In 1959 Rice attended Texas Women's University, though transferred to San Francisco State University the next year, where she earned a B.A. in 1964 and an M.A. in 1971, including graduate study at the University of California, Berkeley. Rice married her high school sweetheart, poet Stan Rice, when she was twenty and held a variety of jobs, including cook, waitress, and insurance claims adjuster. She gave birth to a daughter and wrote sporadically during these years. When her daughter died of leukemia at age five, Rice channeled her grief into her first vampire novel, Interview with the Vampire, which she completed in only six weeks and published in 1976. The book was deemed a success, but Rice's depression was severe enough to cause her and her husband to drink heavily. Though she continued to write, and even published her second novel The Feast of All Saints in 1980, their lives were only partially fulfilled until the birth of their son. Overcoming her alcohol problem, Rice produced The Vampire Lestat in 1985, a sequel to Interview with the Vampire, as well as several volumes of erotica under the pseudonyms A. N. Roquelaure and Anne Rampling during the early 1980s. She continued to amass a large readership with the Book-of-the-Month selections The Mummy (1989) and The Witching Hour (1990), and subsequent installments in the "Vampire Chronicles"--The Queen of the Damned (1988), a Literary Guild main selection, Tale of the Body Thief (1992), and Memnoch the Devil (1995). Rice also adapted Interview with the Vampire into the screenplay for the successful Hollywood film of the same title which appeared in 1994.

Rice's "Vampire Chronicles" focus on the lonely, decadent lives of modern day vampires from the perspective of the vampire rather than that of the victim. In Interview with the Vampire, set in New Orleans during the 1970s, a vampire named Louis relates his life story and adventures to a young reporter who tape records their session. Recalling his transformation as a vampire in 1790 at age twenty five, Louis describes his first kill and evolving relationships with Lestat, his maker, and Claudia, a child-vampire whom they have created together. An ensuing power struggle between Louis and Lestat results in Lestat's second death, for which Louis is imprisoned in the Theatre des Vampires, a coven of vampires in Paris. After burning the Theatre and escaping with Armand, an older vampire who mentors him, Louis returns to New Orleans where he is an outcast. As in much gothic fiction, underlying themes of homoeroticism and incest are prevalent through the novel. In the sequel, The Vampire Lestat, Lestat awakes from a moribund slumber in the year 1980, upon which he becomes a leather clad rock star. Presented as an autobiographic account, the novel traces the origins and history of vampirism through ancient, medieval, and modern history. The story concludes as Lestat performs in San Francisco to an audience of vampires who prepare to kill him for revealing their secrets in his autobiography and lyrics. A continuation of the previous novel, Queen of the Damned involves Akasha, mother of all vampires, whose scheme to institute world peace involves exterminating most of the male population and founding an empire governed by women. In The Tale of the Body Thief Lestat contemplates suicide and eventually agrees to exchange his body with a mortal to temporarily escape his relentless ennui. Lestat must relearn mortal habits and a desperate chase follows after his counterpart disappears with his immortal body. Memnoch the Devil, the last of the "Vampire Chronicle" novels, involves Lestat's tour of Hell and perilous dealings with Satan, who attempts to recruit Lestat as his assistant. Rice's historical novels The Feast of All Saints and Cry to Heaven also feature alienated and dispossessed characters. Set in Louisiana during the nineteenth century, The Feast of All Saints focuses on the experiences of Marcel and Marie, siblings of mixed black and white progenitors who face discrimination in the Antebellum South. Recognizable by their golden skin, they are never fully accepted by either half of their ancestral races. Cry to Heaven centers upon the life of an eighteenth century Italian castrati, a male singer who is castrated as a boy to preserve his high voice. The protagonist, Tonio Treschi, attempts to fulfill his desire to become among the greatest opera singers in Europe while plotting revenge on his brother for having him castrated and exiled. In other novels, such as The Mummy, Servant of the Bones, Violin, and the "Mayfair Witches" series--The Witching Hour, Lasher, and Taltos--Rice returns to supernatural themes. While The Mummy involves the twentieth century resurrection of Egyptian pharaoh Ramses the Great, The Witching Hour introduces the Mayfair family of witches, headed by the beautiful Rowan Mayfair--a neurosurgeon and feminist--in their New Orleans mansion.

Although some readers find Rice's subject matter disturbing, others take great interest in her treatment of otherworldly beings. Critics have compared her "Vampire Chronicles" favorably with Mary Shelley's Frankenstein, and several have praised her ability to use language to convey different moods. Many reviewers have said that the popularity of Rice's books lies not only in her considerable skill as a storyteller, but with the lurid fascination readers have with such creatures as vampires, mummies, and witches. Commenting on Interview with the Vampire, Nina Auerbach writes in the New York Times Book Review, "Rice brings a fresh and powerful imagination to the staples of vampire lore; she makes well-worn coffins and crucifixes tell new tales that compose a chillingly original myth." Rice's novels are also noted for their appealing eroticism and have attracted the interest of gay readers who identify with the themes of alienation depicted in the underground culture of vampiric society. Though some critics appreciate Rice's philosophical musings on immortality and incorporation of occult history in her novels, others find her writing verbose, implausible, and cliched. Despite such criticism, Rice is credited with rejuvenating the genre of horror fiction with her intelligent, ambitious novels. As Susan Ferraro writes in New York Magazine: "Rice's vampire are loquacious philosophers who spend much of eternity debating the nature of good and evil. Trapped in immortality, they suffer human regret. They are lonely, prisoners of circumstance, compulsive sinners, full of self-loathing and doubt. They are, in short, Everyman Eternal." - from Contemporary Literary Criticism Selectmore