Unbound. Full signature on a card. Approximately 3" x 2.25". Card trimmed just at the edge of the signature, small paper remnant on verso where it was probably removed from a scrapbook, else about fine. 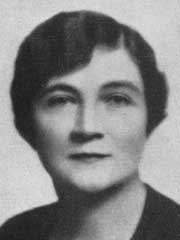 If you've ever attended or exhibited at a book fair in Florida, you'll know that MKR is a "home girl," probably trailing only Ernest Hemingway and John D. MacDonald in popularity as collected Florida authors, and neck and neck with Zora Neale Hurston for third place. Her early books The Golden Apples (1935) and Where the Whipporwill (1940) are especially scarce in fine condition, and not all that common even in mediocre jackets. Both were reprinted, so they need the Scribner "A" on the copyright page to be first editions. Her Pulitzer Prize-winning novel The Yearling (1938) is a classic in all sorts of fields -- Florida lit, nature, children's fiction, as a film source, deer fiction, and what-all else. The book club edition is often confused with the first edition, the only real difference being that the book club edition didn't have a price on the jacket, so avoid price-clipped jackets on this one (the same is true of her 1942 book Cross Creek). Look for two other scarce titles, her children's book The Secret River (1955) and Jacob's Ladder (1950) a slim volume reprinting a single story that appeared in Scribner's Magazine in 1931.more