Baltimore: Printed for the Proprietors by Swain & Matchett, 1809.

Thomas Jefferson's copy, with his block initial marks at signature I ("T"), and at signature T ("I"), and with approximately 42 corrections and emendations in his hand in the text over 32 different pages. Most of the corrections amend the spelling of Greek words by crossing out or underlining the improper letter, and inserting in the margin the correct letter. Many of the corrections are to the Greek, but several also correct errors in the English, such as where he has corrected "Ulyssus" to read "Ulysses" by crossing out the "u" and inserting the "e," or inverting "Is it" to "It is" in a declarative sentence. All the corrections are listed in an errata at the back, and the story goes, though not yet confirmed, that the book was corrected for his daughter who was at the time studying Greek.

Jefferson's use of block initials at signatures I and T began in 1815 after the sale of his so-called Great Library to the Library of Congress; prior to 1815 his books were marked with cursive initials. 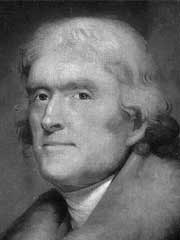 Jefferson's accomplishment's as a statesman and third President of the United States tend to overshadow his very substantial contributions to American literature. He was the penman of the American Revolution who, more than any other single person, created the characteristic language of the new American experiment in representative democracy. He gave clear, definitive articulation to the concept of natural (as distinguished from civil) rights, to the ideas of both civil and religious liberty, to the concept of minimal government, and to the preference for a rural agricultural citizenry over urban industrialism. Perceiving the need for an educated citizenry if democracy were to work, he advocated an aristocracy of virtue and talent over the "tinsel aristocracy" of inherited wealth and privilege. Jefferson was also an early advocate for the study of Old English, for the acceptance of a changing, adaptive English language, and for the development of a specifically American English. He was a major spokesman in the eighteenth-century revival of the Greek and Roman ethical thought of the Stoic and Epicurean schools, making the ideas and the language of those schools a part of subsequent American values and language. Important as an early writer against a state-established church, he was also a key figure in the late-eighteenth-and early-nineteenth-century revolt against Calvinism, replacing the dogmas of depravity, damnation, and predestination with an enlightenment typology of faith in human nature, and progress through education and free will. - from American Colonial Writers, 1735-1781more