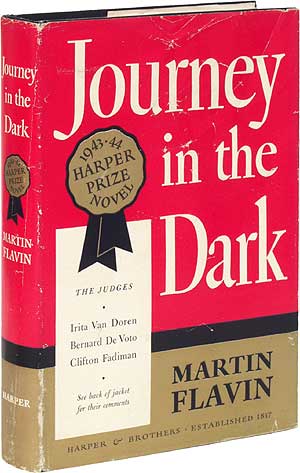 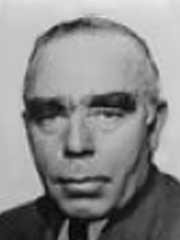 Martin Archer Flavin, best known for his Pulitzer Prize-winning Journey in the Dark (1943), had two other careers before becoming a novelist, spending twenty years in business and another twenty as a playwright. Born in San Francisco, Flavin grew up in Chicago and attended the University of Chicago in 1903-1905. He then tried writing short stories while working nights for the Chicago Tribune before becoming an office boy for a Joliet, Illinois wallpaper company in 1906. According to Flavin, "Writing as a business did not seem to me to promise a financial independence which would enable me to write to suit myself. An opportunity presenting [itself] to enter a manufacturing business, I did so, and for twelve years did not write a line. It was not until 1918 that I was able to begin to divorce myself from business life." ...

Flavin's dramas, comedies, and melodramas explore many of the same subjects as his novels: family and marital relationships, small-town life, labor-management problems, the flaws and virtues of individualism and democracy, the effects of the Depression, and injustice. His novels examine middle-class values, and his characters often come to the unoriginal realization that material success does not bring happiness. Flavin's major theme is probably loneliness; his characters' relationships with their relatives and closest friends usually fade away or become shattered. They can try to reassemble their lives by accepting responsibility for their faults and by coming into contact with the good, if vulgar, people from whom their status has alienated them. ...

Flavin was married to Daphne Virginia Springer in 1914 and divorced in 1917, to Sarah Keese Arnold from 1919 until her death in 1937, and to Cornelia Clampett Bell in 1940. He had a daughter, Flavia, by his first marriage, and two sons, Martin and Sean, by his second. He lived his last fifty years in Carmel and Pebble Beach, California, and died in 1967 of complications to injuries received in a fall.

Flavin is almost forgotten and might be completely but for his Pulitzer Prize. Yet he is not merely another popular novelist of interest only to social and cultural historians, for he is a conscientious writer with a talent for characterization and dialogue. However, his subject matter--his belief that people would be basically good if economic, political, and social systems would leave them alone--is not fresh enough, and his aesthetic approach to it is not stimulating. - American Novelists, 1910-1945